The Fifth Man by John Olson and Randy Ingermanson, a review 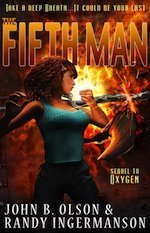 Valkerie, Bob, and two others are spending many months on Mars coping with the harshest of environments and a killer research schedule.

After two of the crew members get sick, the future of the mission dangles in the balance. Will they have to live the rest of their lives in quarantine on Mars? Soon that is the least of their worries. Someone seems to be bent on killing them, and they don’t know who it is. Is there a murderous fifth man on Mars?

What do I think?

This sequel delivers big-time. It’s suspenseful, but not so much that I couldn’t stand it. (I’m think-skinned.) Characters are fully developed and portrayed in depth. Tons of minute details about life in a “hab” make it very believable.  There’s a faith element. In short, I highly recommend this book.