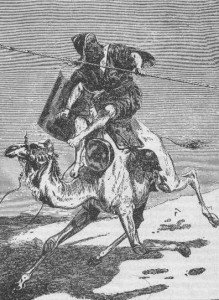 I am a neighbor of Gideon. They call me Elkanah. I was with the three brothers of Gideon when they were ambushed by the kings of the great army of Midian, who roamed the hillsides with 30 men looking for sport a few weeks ago. I rolled under a bush, but the three princely brothers of Gideon picked up their weapons and fought. They died, too. I survived to tell Gideon about it, and he wept and tore his clothes. He’d like to kill those Midianite kings, Zebah and Zalmunna. I can see it in his eyes. But he’s afraid. We were starving and hiding in caves. How could we not be afraid?

Last week Gideon came running down a mountain blowing a ram’s horn, calling us all to arms. The army has gathered here in the hill country of Manasseh, looking down where the enemy army camp fills the Jezreel Valley. We are many thousands strong. Thirty-two thousand. Are we enough to come up against the enemy? Perhaps. But they have camels, and we don’t. My stomach is tied in knots.

We hear the order from Gideon’s lips: anyone who is afraid may go home. The Lord will fight, and he will use a smaller army. Twenty-two thousand men pack up and leave, two out of three.  For some reason, I stay. Those of us who are left move our tents closer together and hunch our shoulders against the cool evening breeze. Now what? How can we win?

In the morning Gideon leads us to the spring to drink, all ten thousand of us. He stands watching as we line up and drink, one after the other. After several hours, we are done.

“Those who got on their knees to drink may leave,” he announces to the gathered men. “The Lord will fight, and he will use a smaller army. Leave your trumpets for the men who remain.” We look at each other. Soon there are just three hundred of us left, each with a ram’s horn trumpet in hand. How can we win?

It’s evening, and we retire. Gideon looks nervous. We all do. What can three hundred men do against an army so large that it fills the great valley like a horde of locusts?

In the second watch of the night he calls us all. “Get up! The Lord has given the Midianite camp into your hands!”  He is smiling broadly, clapping men on the back. His confidence is contagious.  We pick up the trumpet, empty jar, and torch that he gives each of us, our weapons in this strange battle.

In three companies we ring the vast camp, and then we begin blowing trumpets, breaking jars, and shouting, “For the Lord and for Gideon!”  The sounds are coming from all directions, it must seem to the soldiers. In the inky darkness, they stumble and draw their swords. Soon they are fighting each other. We stand our ground, and the vast army begins to move, fleeing to the east.

It’s a story we will surely tell our grandchildren, and they theirs. We pursue the addled army. Gideon calls out more Israelites, who block the passage across the Jordan. Soon most of the Midianites are dead, even two princes , Oreb and Zeeb. How could just three hundred men do all this? With the help of the Lord. We all know the answer. We need to come to know this Lord better.