My Year in the Middle by Lila Quintero Weaver, a review 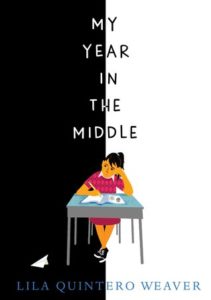 It’s April, 1970, in Red Grove, Alabama. Lu, a sixth-grade girl from a Venezuelan family, just wants to get along socially. The schools have been integrated for only six months, and the town is divided about it. George Wallace, a notorious racist, is running for governor again, and most of the white folks support him.

Lu and her best friend Abigail go to a Wallace rally. Lu is only there for the cakewalk, a cross between bingo and musical chairs, she tells herself. But Lu discovers that she hates the racist statements being thrown around

Lu also discovers she loves to run, as the PE teacher readies the girls for a field day. Running, she makes friends with Belinda, the other good runner in the class who happens to be a black girl. It’s a forbidden friendship, at least when schoolmates are around.

So, how much does Lu let her complacent white classmates push her into doing things she doesn’t want to do? Can they make her back away from her friendship with Belinda? Will she go with these people to the new whites-only private school in the fall?

This book does a good job of exploring how a sixth-grader feels when her conscience is pushing her to take a lonesome stand against her peers. Racism is still with us, so it’s still relevant, and the engaging story is well told.