The Hostage Prince by Jane Yolen and Adam Stemple, a review 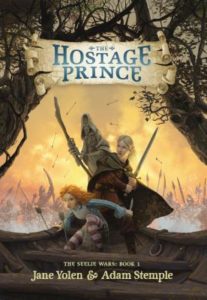 The apprentice and the prince find themselves thrown together as they run away, hoping to stop a war they hear is imminent. They’re such different personalities. Prince Aspen struggles with how to serve his people. Snail struggles with solving the next problem.

This book has plenty of twists and turns as Snail and Prince Aspen escape their castle prison and head for Seelie lands. It’s a richly imagined world, with a funereal ferryman and a treacherous crow, wild mermen, trolls, ogres, and all that stuff. It’s also funny as many of the reader’s expectations are upended.

By the end of this book, the adventure has transformed from what we thought it was at first, and now is something else entirely. But it’s clearly moving forward into future books with these endearing traveling companions, and I am glad about that.