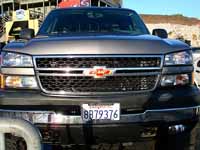 My friend S. was spending the summer in a college town 8 hours away. The purpose? To learn the language of her country of origin, so that she could more effectively minister to refugees here in St. Louis. S. is a mother of two grown children and works, but the Lord had put this into her heart to do this. She had hardly spoken her native language since about the age of six, and was terribly rusty.

So she collected financial supporters and set out for this college town. Things went well there; she worked hard. But someone stole her wallet. In the wallet were her credit cards and her driver’s license, among other things. The credit card situation could be handled, but the driver’s license posed a problem. In order to get a new driver’s license she would have to come back to St. Louis on a weekday, meaning losing two or three days of the precious intensive summer school instruction. That would set her way behind. She prayed about it.

She got a call from the secretary at her place of work in St. Louis. “We have your driver’s license here.” What??? The license had appeared in her boss’s pickup truck, an eight hour drive from where it had been stolen. She got it back and didn’t have to drive illegally or fall far behind in her class.