Free ebook for today: Light of Eidon by Karen Hancock 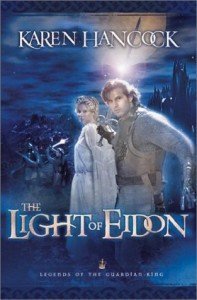 Light of Eidon by Karen Hancock, a Christy Award winner for fantasy in 2004, is our featured free ebook for today. You can get it on Kindle, where you can read it on the “cloud reader” without a Kindle device.  One hundred seventy-five Amazon readers give it a composite of four out of five stars, the same ranking it gets on Goodreads with 688 readers. Published by Bethany House.

Here’s what the author says about the book:

Abramm Kalladorne has dedicated the last eight years of his life to becoming worthy to touch and tend the Sacred Flames of Eidon, and he expects to be blessed for his devotion and sacrifice. But on the eve of taking the vows that will irrevocably separate him from the life he was born to—as fifth son of the king of Kiriath—he is betrayed by his spiritual mentor and sold into slavery by his brothers.

Swept along by the winds of a new destiny, Abramm is forced to compete in the gladiatorial games of his new masters.

Set in a world of swords and cloaks, of glittering palaces and mystical temples, of galley ships and ancient mist-bound cities, The Light of Eidon is the first volume of the epic series, LEGENDS OF THE GUARDIAN-KING.