The Faithful Spy by John Hendrix, a review 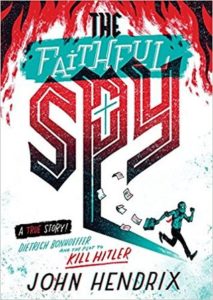 The Faithful Spy: Dietrich Bonhoeffer and the Plot to Kill Hitler, by John Hendrix, is a hybrid graphic novel for teens and adults,  telling an unforgettable story in an unforgettable way. It was published in 2018 by Amulet.

The book alternates chapters about Hitler’s rise and about Bonhoeffer’s life as a young pastor. (There are plenty of illustrations, and also plenty of pages that are mostly text. So that’s how it’s a hybrid.) In 1939 Bonhoeffer wants to get out of his draft notice for the German army, and with the help of connections gets a year’s deferment. He flees to New York.

What a relief to be out of Hitler’s Germany. But he had no peace about being in New York. Where was God calling him to be? He ponders and prays, and decides he ispersonally called to fight Hitler, like David fighting Goliath. He returns to Germany on the eve of World War II.

There, he signs up to be a spy for the Third Reich and at the same time, through relatives, joins an officers’ plot to kill Hitler. Not your typical work for a pastor! But Bonhoeffer believes in, and writes about, faith in action.

I highly recommend this book. The graphic format, alternated with conventional text, makes the subject easy to grasp (though, note, it’s not a book for the typical middle schooler to read alone–the vocabulary is too advanced.)

The topic is great fuel for book discussions at home or at school. It certainly makes me wonder what I would have done in Bonhoeffer’s place. Would I be willing to sacrifice my life in such a struggle? What kinds of sacrifices is God calling me to?