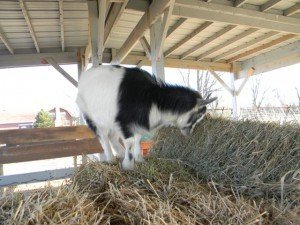 Today my husband and I were in Indiana visiting the farm he grew up on, now rented partly to his cousin Joe, an orchard grower. No one is living there, but Joe comes by often. We pulled up in front of Joe’s little store, closed for the winter, and heard goats bleating. Joe had said something about having goats and chickens for the kids to pet when they came to get pumpkins, so we weren’t surprised.

We were surprised though that one of the goats had leaped out of the pen and came to greet us personally, like a dog (see photo). We went to find the other one, which was still bleating.  Well, turns out he had his head stuck in the fence, after poking his head through trying to reach some hay. His horns prevented him from pulling his head back through the fence. He wasn’t in big trouble yet, but he wasn’t happy.

This little goat needed help. He needed to trust me to get his head unstuck. I petted him for a while and gave him some hay, and then tried to get him to turn his head just so and pull it backwards.  This was to get his head and horns back through the fence, which was made of wire squares of about 6 inches on a side.

Well, the little goat wouldn’t do it. He’d let me put his head at the right angle for just an instant, but he wouldn’t let me push on him so he would back up and pull his head back through the fence. He didn’t trust me.

How like this little goat I am, I mused. I get myself into a pickle, and God’s all ready to get me out. All I have to do is trust Him and do what He says. But I’m afraid, and I don’t do it. So I stay in the pickle far too long.

We called Joe, and he said he’d come soon and rescue the little goat. I tried one more time, but the goat still wouldn’t trust me. So we gave him some more hay and left.