The Language of Spells by Garret Weyr, a review 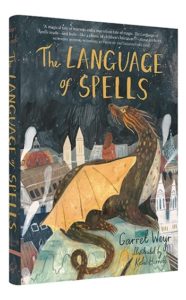 Grisha the dragon had a very unfortunate encounter with a sorcerer named Leopold, and as a result spent a century or so as an enchanted teapot. After he’s freed, soon he’s confined to the city of Vienna–along with all the other dragons caught in Leopold’s spells.

Funny thing, very few people actually see these dragons. Busy people don’t even think to look. But Maggie, a girl living in Vienna, can see them. Soon Maggie and Grisha become fast friends, and Maggie learns the sad story of how the sorcerer Leopold took half the dragons and hid them somewhere in Vienna.  Leopold has moved to Rome, and nobody has found them despite the passage of time. Are they now teapots? Marbles?  Gradually through her best-friendship with Grisha, she resolves to find and free them.

The gentle, winsome story unfolds in a way that leaves me feeling attached to both Grisha and Maggie, especially through the risks they take for each other against the backdrop of “ordinary” life in Vienna. It’s a story well told about the self-sacrificing nature of friendship.

I do have to add that the ending did not feel satisfying to me—Maggie and Grisha achieve something, but that accomplishment isn’t tangible to me in the way that the rest of the book is.

Despite that, the book is definitely worth the read, so look it up!