Why is this car grinning? 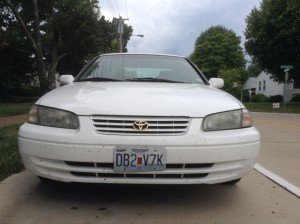 Monster the car is grinning. He thinks he won.

I’ve been fighting with this car ever since we got him, nearly ten years ago.

Took him home, and our mechanic discovered somebody had put antifreeze where the brake fluid ought to be.

The car had that cheesy grin then too.

Well, we got the antifreeze fixed, along with some other stuff. Was I winning yet?

No. I made the “mistake” of unlocking the trunk before the rest of the car, and Monster was sure someone was trying to steal him. He whooped and whooped. Stunned, I didn’t know what to do. Then I put the key into the ignition. Ah. Silence.

Too much silence. The car was dead as a doornail.

That’s when our daughter  named the car Monster.

Monster’s Toyota security system was convinced that this once-luxurious car with leather seats and a sunroof looked like prime property to a thief. But so far as I know, no thief has actually approached him. Instead, Monster defends himself against his drivers.

We drivers learned to tiptoe around Monster’s quirks. Never never approach him without unlocking the driver’s door, sitting in the driver’s seat, and putting the key in the ignition. If you do anything else, including unlocking the passenger door first or the trunk first, Monster jumps to his own rescue and soon plays dead.

I found a great solution: send him off to college with my sons.

Meanwhile, we got another Camry, this one a little newer and more well behaved. It had a troublesome non-Toyota security system which our garage easily disabled for us. We should fix Monster too, I thought. Then I forgot about it.

I found myself driving Monster again for the past couple weeks. No problems. I assumed our son got the security system disabled.

Then I noticed the small axe on the floor in front of the driver’s seat. Was that what my son was using to disconnect the battery?

I sat down in the car a couple days ago, and Monster went bananas. I did what I knew to do: put the key in the ignition. Sure enough, the alarm stopped. And the car wouldn’t start.  Same old drill. No, Monster wasn’t fixed.

I had his number. I decided to drive him down to the mechanic and get his alarm system disconnected, just as soon as I got him started.

Getting him started took a while, a lot longer than normal. Nobody wants to go to get fixed. Finally for some reason he started, and I drove him down there.

I had a little trouble communicating what I wanted to the garage people. They thought I wanted the alarm to work right, when I said “fix it.” That’s not at all what I meant. What I meant was more like what you do to a bull calf. I was chortling.

When the garage people  finally understood what I wanted, they went over the diagrams to investigate.

No dice. The Toyota security system was too deeply wired into the workings of the car, tangled with its arteries or something.

Not only that, but they tightened up the connections to the battery and said loose connections were why Monster wouldn’t start up for me. But tight connections make it doubly hard to disconnect the battery. Especially if you’re out somewhere with no tools, or no tools except an axe.

So I tried one last thing. I spoke to the mechanic directly. I explained that normal operation of this security system required me to be able to disconnect the battery, with no tools, at a moment’s notice.

He came up with a quick disconnect for the battery, something they use on motor boats, and installed it in a jiffy.