Conspiracy by Suzanne Hartmann, a review 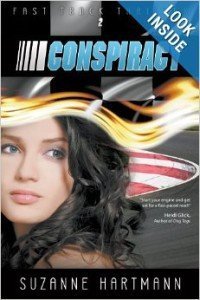 Joanne Van Der Haas discovers that her beloved boss George is accused of selling big-time secrets to the enemy. She struggles with the evidence, which looks airtight. But her gut tells her he’s innocent.

What’s the deal? Joanne is a homeschooling mom and secret agent who can leap 30 feet into the air and run with lightning speed. She’s a superhero of sorts because of the results of a medical procedure that rescued her from life as a paraplegic and set her on the path to protect her country.

The accusation is not just George’s problem; it’s an intrigue that could easily implicate her as well. Will she help George or help apprehend him? How can she tell who is lying? And what about the rogue agent with powers greater than hers who’s out to kill her–and maybe her kids?

How can she chart the right path through all this? Can she learn to trust the Lord and let Him take charge?

This fast-paced book features believable characters, lots of action, plenty of well textured settings, and a well-knit plot with lots of threads. It’s got a wonderful faith element, focusing on trusting God in the moment. Like any middle book of a trilogy, it doesn’t fully resolve all plot threads. So I’m waiting for the next book! Hope it’s not too long in coming.

Read my review of the first book in the series, Peril.