Peril: A Fast Track Thriller by Suzanne Hartmann, a review 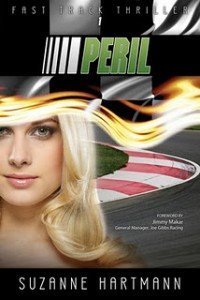 Joanne’s an Illinois homeschooling mom struggling with the fact that her husband is losing a battle with cancer.  She’s a survivor herself–she recovered from paralysis, thanks to an experimental adult-stem-cell treatment. Her family’s future looks uncertain, but she tries to trust God about it.

Lady Anne is a bodyguard working for a secret government organization who’s beautiful and amazingly strong, a superwoman. She shows up once in a while for unique assignments, such as protecting the king of a tiny Muslim country who recently became a Christian when he comes to America. First she saves the day during an attack at a White House dinner, and then at a NASCAR race. The king is a NASCAR racing fan and doesn’t seem too worried about stepping into danger.

And there’s Stuart Jackson, a successful NASCAR champion who takes a shine to Lady Anne. After spending a bit of time with her, he wants more–not only is she beautiful, but she’s got a peace about her that puzzles him. He’s succeeded at all his dreams, but his life is missing something. He wants her to tell him what it is. If he can find her.

Meanwhile, the Muslim extremists who try to kill the king broaden their net. They want to kill Lady Anne too. Can they find her?

Debut author Suzanne Hartmann weaves all these threads together into a twisty suspenseful plot that readers will enjoy. I especially liked the unpredictable elements of this story, of which there were many, and the believable characters.