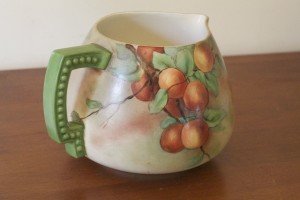 My Granny Jennie, born in 1885, hand-painted this pitcher in an art class in college. She had a college degree, rare for her generation, especially for women.

I remember her the best of all my grandparents, because she traveled south to live with us in the winters when I was small. She spent plenty of time watching me and my brothers and sister over the years. She was old even then, and lived to be 90.

Jennie May Eldred was born into a well-to-do family from Carrollton, a mid-sized town in Illinois. Her father, Samuel Eldred, eventually inherited presidency of a local bank from his father, but first he homesteaded a large farm in a nearby county. That’s where Jennie and her two brothers were born and grew up. She was the youngest of the three. 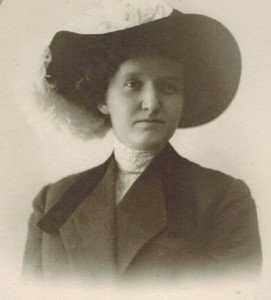 She went to a boarding school in Alton for high school, then to Illinois College in Jacksonville for two years, and finished up in 1907 with a “bachelor of letters” at what is now Miami University of Ohio, where she painted this pitcher and some other ceramic art. She did well in chemistry, but she never got a job–I suppose a woman of her social station had very few options in the way of work back then. Besides, maybe she wasn’t really cut out to be a teacher or a nurse.

Her option, apparently, was marriage. But she got to be 28 years old and wasn’t married.  I’ve heard that Jennie’s parents were starting to expect house cleaning services from her.

Which is how I suppose she accepted the proposal of Thomas C. Hough, my grandfather. They married in 1914 when she was nearly 29. Since he was hard to get along with, as I have mentioned before, she may have known it might not be an ideal situation. Or maybe she didn’t know. The marriage gave her two sons, including my father, her oldest. A daughter died in infancy. 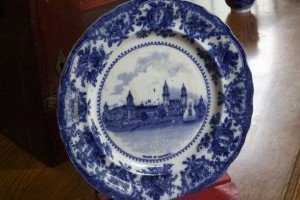 She had a number of artifacts from the 1904 World’s Fair in St. Louis. She must have loved the fair, an international exposition a day’s buggy ride from home. She would have been 19 years old then. I have this plate of hers.

Jennie never learned to drive. I’ve heard that when her husband tried to teach her, maybe in her thirties or forties, she pulled back on the steering wheel and said “whoa.” Naturally it didn’t stop and crashed into the garage. She never wanted to try again.