My project: novels for tweens 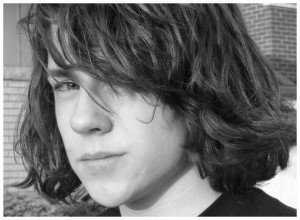 I’ve been up to a lot of things lately, and one of them is a series set in the fictional St. Louis suburb of Sugar Creek in 1969 or so.

One protagonist is Ollie (left), a 15-year-old musician who just moved to Sugar Creek from New York. He’s having a little trouble fitting in, and he does just the “wrong” thing when he makes friends with a black kid from the other side of town.

Another is Pete, also 15, who can hardly read. Being called stupid and lazy one too many times propels him to run off to the woods, where he meets a black man who must be up to no good.