Winter by Keven Newsome, a review 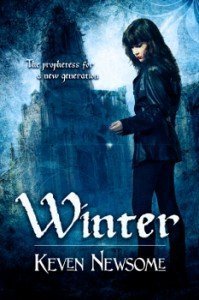 Winter by Keven Newsome
Published 2011 by Splashdown Darkwater, 334 pages
Genre: Christian supernatural suspense, not suitable for 15 and under in my opinion

Two alternating stories about Winter Maessen unfold in this book, separated by three years. In the earlier one, a high school freshman must deal with her mother’s impending death from cancer. After her mother dies, she goes Goth, dressing in black.

In the later story, the fragile young woman, still dressed in black and now beset by terrifying visions, begins her freshman year at a Christian college. Soon she finds herself and her friends embroiled in intrigues. Someone kills a campus woman in a Satanic ritual and frames a student Christian leader who is thrown into jail.

Winter knows the student leader is innocent. Her visions show her a demon-man who will strike again. Will she risk her life and those of her friends to go after him?

What do I think?  This book has a breathtaking resolution, which at the same time leaves the door wide open for a sequel. The plot, characters, and descriptions are well crafted.  I’ll be happy to read the next one when it comes out.