The Writer, Your Servant 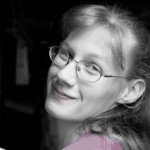 I had a big hurdle to get over when it came to becoming a writer—someone who wrote seriously and often, as opposed to someone who just scribbled down thoughts now and again or played endlessly with stories in her head. The hurdle is a little hard to describe, so I’ll break it down:

2. Christians should be servants (for it is servanthood that truly “matters”; see Mark 10:44).

3. Writing is a solitary and inward-looking activity.

4. I did not think that solitary and inward-looking activities counted as service.

5. Therefore, writing looked like a selfish, valueless waste of time.

That hung over my head for years. In fact, even after I’d written Worlds Unseen and its first sequel, Burning Light, I still struggled with the idea that what I was doing was selfish and without value. And yet, I was born to write. That was becoming clearer with every passing day. Talk about a quandary.

Now, I clearly should have thought this through a little more. Like so many of the things that hold us back in life, it would have shriveled under the light of honest scrutiny. After all, how did I think the Bible got written? And did I really think the stories and writings that had literally changed my life—fiction and nonfiction—were without value? Did I think those writers should have gotten out in public and worked in a soup kitchen instead of using the gifts God had given them to serve people in the most effective way they could?

Of course not. And today, having realized more fully the incredible power of words and stories, I’ve come to realize that I can be a writer-servant. And that, in fact, that’s almost certainly what I’m called to do. Shortly after I released Coming Day, the third book in the Seventh World Trilogy, a reviewer wrote,

“I don’t think I’ve been this spiritually encouraged by a book in a long time. I felt that I turned a corner in the last few chapters, and found that the story which began in a strange land, a land vaguely similar to my own but the stuff of legend, had ended up all the way in my own room at 4 p.m. It was not a startling jolt from a world of wonder back into my own dull life. Rather, it was like waking from a glorious dream to find that the best parts have been true all along.”

Maybe you don’t write. But I’d be willing to bet that there’s something you would love to do, something you were born to do, that a little voice in your head tells you is worthless. But here’s the thing: like the great Author that he is, God has invested you with gifts and talents. They aren’t to be thrown aside. They’re to be used in his service and in the service of his people.

For writers, the calling is clear. Tell stories that awaken people to reality in a world that is heavy with the fog of lies (ironically, fantasy fiction can be incredibly effective at this). Offer rest to the weary, or a good hearty laugh to someone who hasn’t laughed in a while. Set truth in bright relief. Wash feet, using words. Serve.

For you, whoever you are and whatever you do, the calling is similar. Don’t jettison your innate strengths, figuring that something else is what you should be doing. Instead, learn how to put your gifts to work in the service of God and others. Embrace the calling your Creator has endowed you with—whatever it may be.
* * *

This article is one of a four-part blog tour series on life and art, reading and writing. You can read the others at